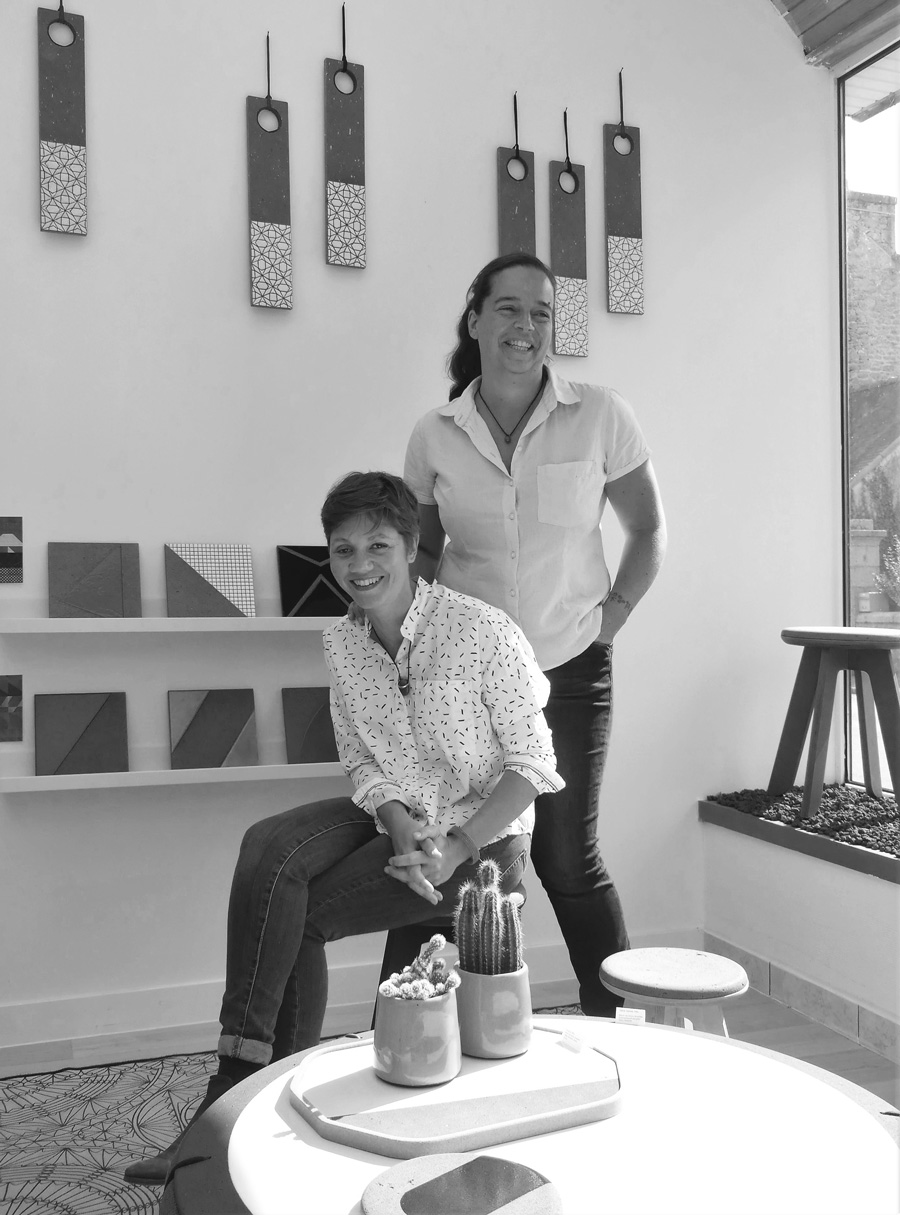 Lydia and Renato met in 2004 and are a young couple of designers and craftmen. Both are passionate about furniture design and architecture, leading them to launch Studio LeR in 2015. Life, unfortunately, had other plans. In 2018, after Renato’s passing, Lydia took over the company, with help from Jessica, Renato’s sister. Together they revive Studio LeR and its projects.

Lydia Belghitar was born in 1986. She is a certified interior designer technician, and holds a master’s degree in design from the Angers Higher School of Art & Design. She has worked alongside such designers as Mathieu Lehanneur, Pierre Faveresse, and Jean-Paul Marzais. As a freelance designer, she developed for Marzais Creations a series of light fittings, among which the Kingston spotlight has obtained a VIA Label during the Maison & Objet trade show. She then worked in France for industry leader IKEA, where she designed interior layouts for the Tours and Bayonne stores. She also took part in designing the layout of a brand new store in Clermont-Ferrand.

Renato Richard was born in 1981, and was originally certified as a pharmaceutical industry technician. He has worked 10 years as a task officer in pharmaceutical logistics and production. Ready to launch his own business, and willing to come back to his first trade, stone cutting, he enrolled at the Volvic School of Architecture, and learnt to work on enamelled lava. Once certified, he decided to stay in volcano rich Auvergne and launch Studio LeR.

Studio LeR creates everyday objects and collaborates with craftsmen and model makers based in France. The studio’s R&D office enables projects to be brought to life, from sketches to prototypes, schemes to 3D modeling and scale models.

Volcanic stone is used in both inside and outside layouts. Once enameled, it is UV proof, extreme heat and cold resistant as well as shock resistant, and unaffected by acids. Its many characteristics make it a high quality material, unaffected by the passage of time. It brings unmatched depth and colour to any project.

OUR MATERIALS: Lava stone, our speciality

This unique stone is shaped, enamelled, and cooked in our workshop, using high temperature ovens. With a hardness standing midway between marble and granite, lava is the only stone that withstands enamelling. These natural stones come from ancient lava flows, true imprints from the bowels of the Earth. This is a noble, high end material. Using lava enhances the aesthetic value of any project, by blending the raw mineral aspect of the stone with the finer, softer elements of the enamelling. Studio LeR exclusively uses lava stone from the volcanoes of Auvergne in France.

Volvic lava: this is a very high quality stone. It is dark with a homogenous, light bubbly texture.

Chambois lava: with more or less coarseness and a deeper grey, the Chambois lava has a stronger texture.

Our approach is to work alongside the synergy of our experiences which allows us to design products that are both contemporary and valuable.

Inside the workshop, the sound of stone modeling resonates. Enamel on stone crackles, when taken out of the oven. Kept in glass jars, coloured enamel powders, either pastel or vibrant, give free rein to imagination. Modern and traditional tools animated under the craftsmen’s orders.

Inside the office, pencils are busy filling sketchbooks. Digital tools a used to their full extent while paper and cardboard are being modeled into prototypes. On every desk, each book, each sample and technical drawing is carefully studied by the designers in order for them to develop projects with a unique signature touch.